skip to main | skip to sidebar

The Tanka People of Hong Kong

I have a fascination for Hong Kong's Tanka people and I promised ages back to explain why. 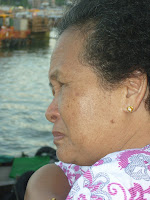 A Tanka lady of Sai Kung.
You tell me where you'd more
normally expect to see that face?
Anyone who knows me, or indeed reads my blog, will know that I have a semi-toxic love/hate relationship with mysteries; that anything I don't understand (unless it's to do with technology, computers or maths - yawn!) immediately becomes an obsession and I absolutely cannot stop until I get it, whatever it is. Even if it takes me years - and some of my more intractable mysteries have lasted my whole life - I keep accumulating facts and data until, extraordinarily, I feel an internal "click" and suddenly the entire story makes sense to me. Honestly, I don't have to do a thing; it's something my brain does all by itself. All I have to do is feed it.

Then, post-click, I simply lose interest, although, unfathomably, I get very cross whenever someone says anything that argues against how my brain has put it together. Go figure!

Well, the Tanka people have long fascinated me simply because everything about them is wrong ... although WRONG isn't the right word; probably a better way to put it is that everything about them doesn't mesh with what we currently accept as THE TRUTH about people and pre-history! But there's other stuff too, and it's on so many levels.

First off, the Tanka people live on boats their entire lives ... 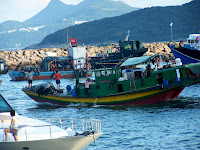 ... which has occured since at least 130 years ago when the photo below was taken ...

Historical photo of Tanka sampans
Did it then, do it now!

... the reason being that they have a superstition that if they come to live on the shore a giant wave will sweep them away. And they have an ancient legend they quote to prove that this is indeed so: that before they lived on boats lots of them were swept away by giant waves.

Now remember those "giant waves"!! That's the thing, apart from their appearance, that so captured my imagination. Keep it in mind because we will come back to it, and, trust me, what I have to tell you is HUGE!!! And, amazingly, no one yet has put it together, so I'm offering my discoveries to anyone in the field who'd like to do the hard slog necessary to research it properly.

Secondly, the Tanka are the original inhabitants of our region; the South Seas pirates who terrorised shipping throughout the Asian region for hundred of years, and who were the sworn enemy of a great many generations of Chinese Dynastic Emperors. Lots of Chinese history involves either warring with them, as you can see in John Woo's terrific new Chinese film "Red Cliff", or attempting to steal their land, which - ho hum - didn't really bother them. Boat people, see!

Thirdly - here it gets really intriguing - archaeological evidence shows that there were primitive people who archaeologists have named The Mabo in this region back at least 120,000 years. Yeah, yeah, we all know that it's accepted pre-history that we all hung around Africa till 60,000 years ago ... but no one told these guys. 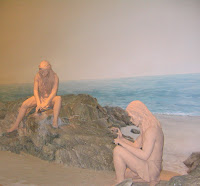 A diorama of The Mabo
at the Hong Kong Heritage Museum
And what do you know?, despite what you read here about the Tanka, DNA tests show that they are in fact the descendants of the Mabo, which means these people have been rocking around this region for over 120,000 years.

Fourthly? OK, this one is so special I didn't really want to include it in this post, but ...

... the Mabo worshipped rocks - special rocks obviously, not just any old rock - while the Tanka worship their fisherman god Tin Hau. Hardly the same thing at all, right? However if you go visit any Tin Hau temple and creep around the back, you'll make a remarkable discovery. Let me show you what I mean:

And around the back,
note the very impressive rock
behind the Tin Hau statues. 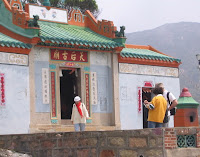 And around the back.

Actually, the rocks around the Tai Po temple are so interesting and so strangely shaped, I really should do a separate posting on them. Only, you know, it'll involve another trip out there because I didn't take any on our last visit, not having yet realised The Secret of the Tin Hau Temple Rocks! But Tai Po has such great seafood restaurants, I will willingly sacrifice myself to this cause.

I accidentally wiped the close-up historical photo where you can see the rock built into the fabric of the building above, but I do have this photo of another rock-in-temple I took myself: 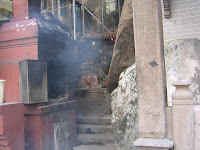 Rock built into the fabric
of a Tin Hau temple.

So, do you get it? The Tanka/Mabo obviously have never stopped worshipping rocks. They are just more sophisticated about how they do it these days.

Fifthly, based on their appearance, it came as no surprise to me when I read that DNA tests revealed that the Polynesian people were "Adam and Eve-ed" by 14 Madagascan-via-Java males (the proto-Fijians) and 14 Tanka females. (As per my posting Made in Indonesia about my discoveries re: the Origins of the Polynesian People.)

Realise now where you've seen the above Sai Kung lady before? Yup, that's a face you are forever seeing throughout the Polynesian Pacific, only there it's slightly darker, slightly less concave and with slightly larger lips. I would even put good money on testing her DNA against any random person in Rotuma because that resemblance is so particularly close.

Or maybe the people from the islands formerly known as The Tokulaus and now, thanks to global warming and rising sea levels, simply known as "The Pacific Ocean". Just compare her face with that of Opi in the film clip posted below, and you'll see what I mean.

And look at this drop-dead gorgeous Tanka guy: 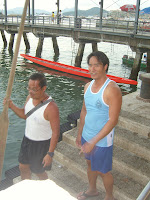 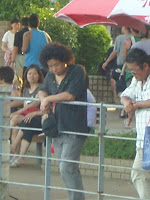 And what genetic kink makes them all so predisposed to Aloha Shirts and white trousers? 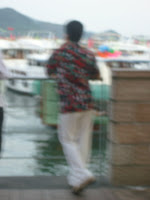 Tanka ashore for the evening!
And check out this Tanka guy's hair ... 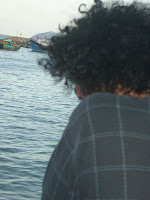 And they're all make a living fishing: 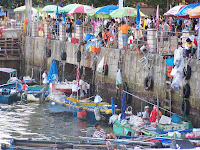 Tanka lining up to sell their
catch to seafood restaurants.

And they're all so into rowing and Dragon-boating and other sea-faring stuff: 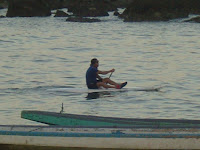 Remind you of any other Peoples anyplace else?

Right, so that's what's actually known about these astonishingly ancient people. What follows is stuff I've put together myself:

Like, remember those giant waves? Did you know there are places around the Pacific Rim - like Malaysia and Papua New Guinea - that have ancient legends about strange and mysterious people arriving on their shores carried by a giant wave. Yup, lots of stories about people being swept in by giant waves, but it is only the Tanka who have legends about people being swept away by giant waves. People arriving and people departing? Nice mesh thing happening there?

And don't say "But they're just legends!" I did a degree in reading history through myth and legend and it's a simple fact that myths and legends are the folk records of historical events, only all kinda jazzed up for good story-telling!

But we are talking meshes, and there are lots of nice meshes that happen within this Giant Wave story, like the recurring date of "about 18,000 years ago".

First off, in Papua New Guinea there are a great many tribes who call themselves The Children of Kaylap, who claim descent from a mysterious Ancestral Mother - Kaylap, obviously - who was carried to their shores by a giant wave.

A Child of Kaylap.
Since these Children of Kaylap collectively have a curious immunity to all mosquito-borne diseases, they were the subject of study by Oxford University's Malaria Research Team well over a decade back. And the results were that they all shared a strange cellular structure peculiar to them which was introduced into the population from an outside maternal source "about 18 thousand years ago".

Then you have those Hong Kong caves you see from the bus when you travel over Lantau Island to visit The Big Buddha. You've seen them, right? On the mountain? And the sign that says they are an important archaeological site? Well, what that's about is that, when archaeologists were investigating the Tanka "giant wave" story, these are the caves that the legend says they hid in to escape those giant waves, only they were fisherfolk so, starving, they had to return to live by the sea, only now they built boats to live in so they wouldn't be swept away by those waves anymore.

And when they carbon-dated the fires in those caves? They're from "about 18,000 years ago."

And then you have the thawing of the last Ice Age, which involved the Canadian ice caps sliding off the mountains and landing in the Pacific, causing giant waves to ricochete across the ocean, hitting distant lands, returning, hitting the massive iceberg, setting up for another swell and then giant waves all over again. And this, they say, went on for well over a century. And the time they ascribe to this happening? Oooh, "about 18 thousand years ago".

Have I convinced you? OK, maybe not. You too would like more evidence?

Well, The Oxford Malarial Research Folk said that The Children of Kaylap tribes of PNG had mysterious maternal DNA that didn't match people anywhere else on earth ... but you didn't test it against the Tanka, did you, Oxford University Malaria Studies people? If only someone would do the test, I think we'd have the answer and, yes indeed, it would be affirmative.

Of course, I understand that it's hard to accept this because those are impossibly vast distances between Lantau Island in Hong Kong and the northern shores of Papua New Guinea where she was found, but when the Tanka story says dozens were swept away and the PNG story says only a single young girl arrived, I suspect we are looking at a miraculous and epic survival story by a single amazing individual.

However, the Malaysian story involves two young boys being dumped on their shore by a single wave, so not all of those Tanka "dozens" remain unaccounted for.

And although I could say more on this subject, it's still only in the germination stage so let's end it with another picture of Tanka boats ...

OK, you caught me! It's just an excuse for yet another gratuitous sunset shot!
Posted by Denise at 9:19 PM

Intriguing! I'm Tanka on my father side. The woman on the top of the page could have been my grandmother.